"the most conspicuous bravery, a daring or pre-eminent act of valour or
self-sacrifice or extreme devotion to duty, in the presence of the enemy"

Since the original Victoria Cross was established by Queen Victoria on January 29th, 1856, 99[1] Canadians have received the prestigious award. Yet, nowhere in Canada until 2017 with the official dedication of the Victoria Cross Memorial at York Cemetery had all 99 recipients been honoured in one location.

In recognition of Canada’s 150th anniversary since Confederation, the Victoria Cross Memorial, designed by Jeff Dennis, architect and Director of Development for Mount Pleasant Group of Cemeteries, was conceived as a feature of special significance. Centrally located along the boulevard which provides a grand vista from the entrance gates at Beecroft Road to the cenotaph at Senlac Road, the memorial honours the recipients. Ninety-nine plaques provide a brief recount of the gallantry and act of bravery of each individual that resulted in the award being bestowed upon them.

Recognising the importance of their acts, Mount Pleasant Group of Cemeteries also organised the creation of a book, Canada’s Victoria Cross Recipients which is available digitally here: 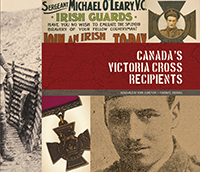 [1]  Representing all Canadians in addition to those from other countries serving in a Canadian Regiment who have been awarded the Victoria Cross.